Continuing on the theme of glass-less 3D displays mentioned a few days ago, The Register reports that Apple has patented a 3D display system that requires neither special glasses or ‘parallax’ screens that enables  “inexpensive auto-stereoscopic 3D displays that allow the observer complete and unencumbered freedom of movement.” The system’s concept revolves around the use of a combination of eye-tracking and a reflective display that monitors the position of the user and bounces the image from a projector so as to split 3D content for the left and right eye.

Apple seems to agree more or less with our comments on our previous post (quotes are from the patent):

Apple’s effort is to first track viewers’ position and movement, and then use that information to guide the projection of pixels onto “a projection screen having a predetermined angularly-responsive reflective surface function.”. Each projected pixel is beamed onto a textured, reflective surface and reflected to the eyes of each viewer, separating left and right views and therefore producing a 3D effect. The projection angle changes according to the input of tracking sensors detecting user movement in relation to the screen. 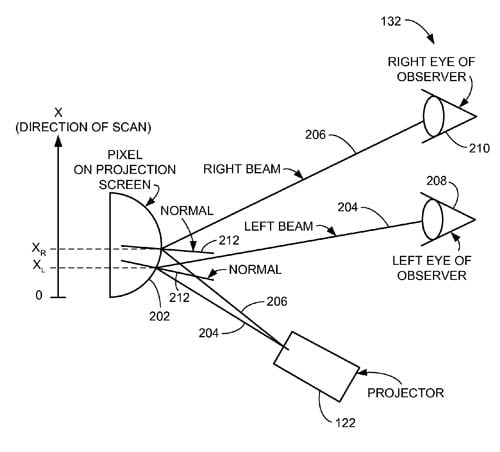 Each pixel is aimed at a curved surface, where it reflects onto the correct eyeball

Apple assures us that it “valuably supports and services the historical trend of reducing costs, simplifying systems, and increasing performance”. We could not agree more on this philosophy.  What remains to be seen is whether Apple will actually realize such designs. We say they will.

Workshop – I: How would you design an #AR marker (to minimize the computational cost of detection and tracking) - http://t.co/xft1W86d
View on Twitter
1
0